El Salvador Plans To Create an Entire City Based on Bitcoin

El Salvador Plans To Create an Entire City Based on Bitcoin

El Salvador’s government is throwing even more of its weight behind Bitcoin. Coindesk and BBC News report President Nayib Bukele has unveiled plans to build a “Bitcoin City” near a volcano along the Gulf of Fonseca, between La Unión and Conchagua. The metropolis will have its own geothermal power plant to help support crypto mining, and there will be no capital gains, income, payroll or property taxes, just value added tax.

The city will be shaped like a coin. While it should include the full amenities you’d expect from a city, people in La Unión could travel to work in the new development.

Bukele didn’t provide a timeline for the city’s creation. However, he simultaneously unveiled a $1 billion US “Bitcoin bond” where half would be used to build energy and mining infrastructure, with the rest used to buy more of the digital currency. The strategy chief for bond developer Blockstream, Samson Mow, said El Salvador would start selling crypto holdings after five years and pay an extra dividend to bond holders. With an initial 6.5 percent yield, this could represent a significant windfall for the country if all goes well.

The move is a huge gamble for a company with a gross domestic product of just over $24.6 billion in 2020. Bukele’s administration is counting on Bitcoin to spur economic growth, independence and investment, but this also assumes the monetary format remains on an overall upward trajectory. It’s also unclear if would-be residents and investors will flock to a Bitcoin-oriented city even with tax incentives. This is new territory for cryptocurrency, and it’s not certain if there’s enough support to help the project thrive.

Invest in a new global currency built to free humanity and remove the corrupted Globalist’s control over our nations. Our World Coin is an initiative by the people for the people, and a force for good & a peaceful revolution. For more details, visit https://www.ourworldcoin.org/ 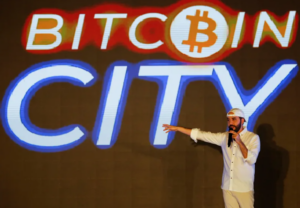