“This is my third crypto winter,” the U.S. brokerage CEO said at Consensus 2022, looking back on the firm’s trailblazing journey into digital assets.

Offering battle-tested advice to the crowd at Consensus 2022 in Austin, Texas, Fidelity Investments chairman and CEO Abigail Johnson said her belief in the long-term fundamentals of cryptocurrency remains strong.

“I figure this is my third crypto winter. There’s been plenty of ups and downs but I see that as an opportunity,” Johnson said of the bear market. “I was raised to be a contrarian thinker and so I have this knee jerk reaction: If you believe that the fundamentals of a long term case are really strong, when everybody else is dipping [out], that’s the time to double down and go extra hard into it.”

To be clear, though, Johnson did not sound sanguine about the recent sharp correction. “I feel awful about the value that is lost, but I also believe the industry in crypto has a lot more to come,” she said.

Attracted by this “clean-slate approach to finance and moving wealth,” Johnson recalled, Fidelity came up with “about 52 use cases” for Bitcoin, the vast majority of which ended up mired in complexity and languishing on the shelf.

Early on, the decision to focus on the technology’s foundational level led Johnson’s team toward custody – but that was not one of the firm’s original use cases, she said, adding candidly that on the product side of things, she was not as far along as perhaps had been hoped when the journey started.

“When we first started talking about it, I think if someone had suggested offering custody for bitcoin, I’d have said ‘no, that’s the antithesis of bitcoin. Why would anyone want to do that?’”

Fidelity was one of the first major institutional players to deal with crypto directly rather than dabble with watered-down versions of blockchain technology, the fashionable route for corporations for a time. Walsh alluded to this distinction, quipping, “It’s not like you were trying to put lettuce on the blockchain.”

Johnson also talked about her decision to get into bitcoin mining at an early stage, which elicited a mix of consternation and confusion from many around her in the financial services space. Indeed, even most crypto people wanted to do something more interesting than mining back in 2014, Johnson said.

Johnson said a plan she’d hatched to spend some $200,000 on bitcoin mining equipment was initially rejected by Fidelity’s finance department. “People said ‘What is this? You want to buy a bunch of boxes from China?’”

Johnson pointed out she no longer has to justify the move into mining as mere “innovation theater,” adding that she feels the same strength and commitment to Fidelity’s recent move to offer bitcoin exposure for clients’ 401 (k) retirement schemes.

“I would have never thought that we would have gotten so much attention for bringing a little bit of bitcoin to a little bit of the 401(k) business,” Johnson said. “A lot of people now, that they’ve heard about it, have been asking, so I’ve been happily surprised at the amount of positive feedback that we’ve gotten on that.”

That said, the move to bring crypto to the 20 million or so retirement plans it oversees was met with immediate pushback from the U.S. Department of Labor as well as Sen. Elizabeth Warren (D-Mass.), citing concerns about the volatility of crypto.

“Seeing some of the regulators trying to lean into this is very encouraging and exciting for us,” Johnson said. “Because if they don’t give us a route to make some of these connections, then it makes it really hard for us in the background to be able to make it feel seamless.” 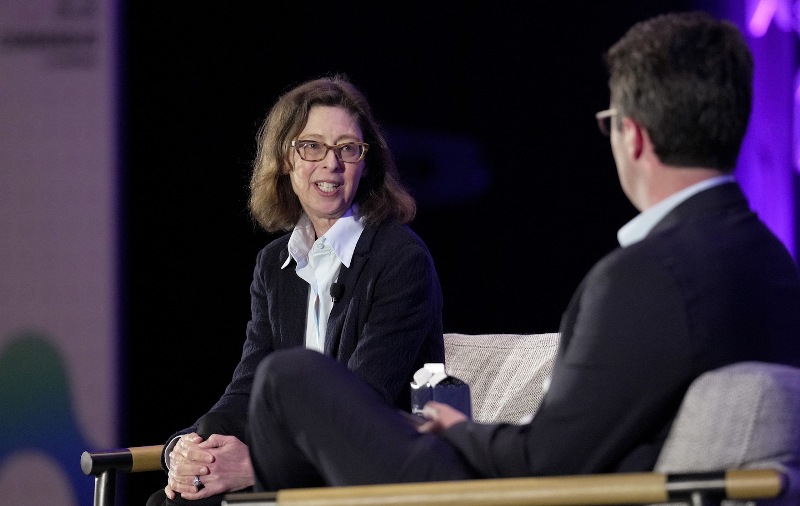